Microbial Fuel Cells (MFC) and Microbial Electrolysis (ME) use living microorganisms as catalysts to directly generate electrical power from the considerable chemical energy available in biomass, wastes and effluents and this power may be used externally as a power source as MFC and as hydrogen in ME.

Although the power densities of these systems have greatly increased in the last decade, the power has been highly dependent on the system scale.

Our team has focused on improving power performance through novel scalable designs of MFC and ME systems. The systems are able to convert waste streams, crops and/or other co-products, directly into electricity, hydrogen, or other materials; and can simultaneously treat waste streams. Hence, their industrial applicability lies primarily in making use of such low grade energy such as in wastewaters and consequently, large volumetric throughput is an important target.

The work on ME has been funded under the separate RCUK SUPGERGEN SHEC II consortium project Further funding has been secured from the new EPSRC SUPERGEN H2FC Hub to investigate enhanced generation of hydrogen by integration other biological hydrogen processes with microbial electrochemical processes.

As a result of the last five years’ work, USW has developed novel scalable MFC and ME system and published 19 international journal papers on its development in high impact journals e.g. Journal of Energy, Environment and Science.

Over this period the SERC team at USW has increased the power density in their novel systems from 6.1 to 63 Wm-3, a 10 fold increase. Also these systems can operated at 15oC, saving significant operational energy costs.

An industrial feasibility study has been conducted funded by A4B, during which 15 companies from a number of different sectors were engaged. A study was also conducted to ascertain the efficacy of our first generation tubular MFC system to remove pollution in energy efficient way, reducing costs of discharge of waste-waters to sewer. Several funding applications with support from various companies across Europe have been made as a result. For example a collaborative investigation with Mast Carbon in which the company provide specialist carbons for use in an MFC, has been conducted and another is underway. 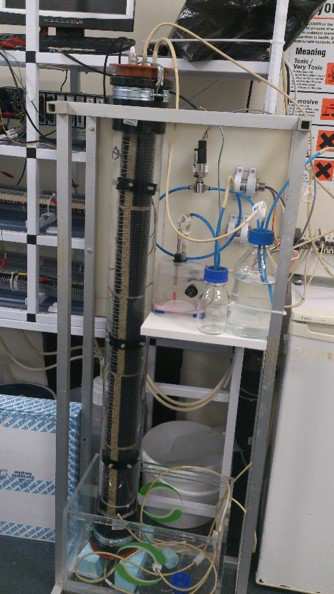 As a result of the last five years’ work, SERC has developed a novel scalable MFC and ME system and published 19 international journal papers on its development in high impact journals